Murder! was the original patent and the origin of the game Clue which was created in Birmingham, England by Anthony E. Pratt with the assistance of his wife, Elva Pratt.

A young British law clerk, Anthony E. Pratt, was working in Leeds as a fire warden. The idea of Clue came when Pratt created a murder game that he played with his friends at the law firm. The murder-mystery theme was explained by Pratt that "between the wars all the bright young things would congregate in each other's homes for parties at weekends. We'd play a stupid game called Murder, where guests crept up on each other in corridors and the victim would shriek and fall to the floor[1][2]."

Eventually, Pratt and his wife Elva began to fortify the game's mechanics and rules. Pratt created the suspects, victims, weapons, and rooms. Elva designed the board[1].

In 1949, Waddington's Games began production on Clue. Today, the game is Waddington's best-selling game after Monopoly[2].

In Murder!, like Clue, players assume the roles of the suspects as detectives to discover whodunit, with which weapon, and in what room. First, the top suspect card is drawn from the deck and is revealed to the players as the victim. Now, the cards of the murderer, murder weapon, and room are placed under the board. After this, the various cards are distributed to the rooms of the mansion. Counters are also distributed to the players to record the number of their suggestions. Players are able to enter rooms and take the cards; players may now begin making suggestions and interrogations. The players must make contact with the suspect in order to suggest a possible outcome for the murder. After this, the player's pawn, the suspect's pawn, the weapon pawn, and a counter is place in the room. When the player loses all of his/her counters, they are no longer to make suggestions.

Originally, Mr. Boddy (Dr. Black) was not intended to be the victim. In Murder!, players would draw cards to determine who the victim and the murderer was. Therefore, the victim would change in each game. At the beginning of each game, one would draw the top card from the pile of characters and show all other players. This top card would represent the identity of the victim of murder in each game.

The weapon tokens appeared as they did in the original version of Clue. Only the weapon cards displayed images.

The Boddy Estate originally was designed by Elva Pratt to have 11 rooms on the main floor of the mansion. The board has additional rooms as indicated above. There are two starting spaces for suspects on each side of the board - this accounts for the unused spaces between the Dining Room/Kitchen and Study/Hall on the final product when the game was reduced to six suspects. There are additional doors to some rooms as well. The patent specifies, however, that no two doors should be facing each other. There are no secret passages indicated. 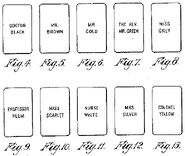 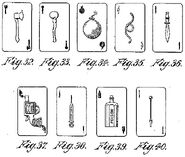 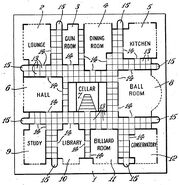 The board designed by Elva Pratt

Community content is available under CC-BY-SA unless otherwise noted.
Advertisement